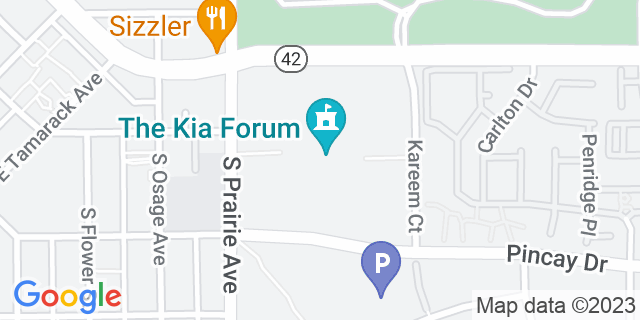 Located in Inglewood, and adjacent to the City of Angels itself, the Los Angeles Forum is a groundbreaking structure which opened on December 30, 1967. It receives its greatest fame as the home of the legendary Los Angeles Lakers and the Los Angeles Kings of the National Hockey League. Although the celebrity stand sitings at the stadium may be well worth the admission price, the sports and entertainment are always the main attractions.Since opening its doors in 1967, the Forum, which seats over 17,000. has hosted such musical greats as Led Zeppelin, the Rolling Stones, the Jackson 5. The King himself, Elvis Presley performed both afternoon and evening concerts there, The Bee Gees used the Forum to record their "Here At Last…Bee Gees…Live" release, and Kiss played three shows there that were later released as "Alive II." Besides great sports and music, the venue's features include a state of the art support systems, known as the "Sky Deck," a stunning feat of architecture consisting of an invisible meshed platform capable of supporting up to 350,000 pounds of hanging weight to accommodate even the most elaborate concerts and events. An expanded food and beverage area comes complete with a glass wall ensuring that fans do not miss a moment of the action, and at the LA Forum, the action is always on.