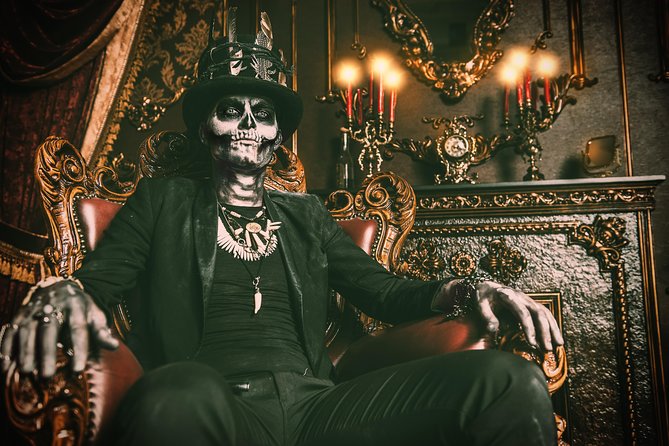 + 15
New Orleans is " The Most Haunted City" in the United States with rich paranormal history like no other. Allow our master storytellers to walk you through the realm of Ghosts, Voodoo, Vampires & More.

While on tour, you will visit New Orleans' most haunted & featured location, the Lalaurie Mansion. Delve into the bone-chilling story of Mad Madam LaLaurie... considered one of our most sinister historical figures. This is also where Kathy Bates filmed The American Horror Story.

This 90-minute tour covers New Orleans' dark history- you will leave with feelings of excitement and trepidation as you continue on to explore the streets of the French Quarter.

Please arrive 15 minutes prior to tour departure for check-in. Tour departs on time. Refunds will not be issued for late arrivals. Each tour is unique and may or may not include all of the stops listed above or may stop at other locations, not on this list. Please be advised this is an outdoor walking tour.

Your local guide will share dark, mysterious stories and legends about these French Quarter haunts, some of which involve voodoo, witchcraft, ghosts and vampires!

Louis Dufilho, America’s First Licensed Pharmacist, opened what is known as the Pharmacy Museum in 1816. Now, this former apothecary shop hosts an assortment of medical exhibits from the past for your viewing pleasure.

The beautiful landmark known as Jackson Square is named after the legendary General Jackson who led soldiers to victory during the Battle of New Orleans. On a Witches Brew tour, you’ll pass this location and get to view the statue of Jackson.

Since the 1990s, Voodoo Authentica has been crafting handmade voodoo dolls, gris-gris bags and more from Dumaine Street in the French Quarter. This is just another legendary location that visitors are pointed towards during a Witches Brew Tours voodoo tour.

Find out about the legend of the Casket Girls and how they were thought to be the first North American Vampires.

As you explore the French Quarter you will learn about the horrifying tales of slaves at the LaLaurie House and learn about various other ghostly and ghastly characters of New Orleans's sordid past.

Visit one of New Orleans' oldest structures, and some of the former resident souls. Formerly the site of infamous Jean Lafitte’s illicit privateer operation, it's one of the most haunted buildings in the French Quarter.

Christy was a great tour guide! She handled a woman in our group who was rude and heckling from the moment the tour started. Once that settled the tour was informative and fun. She knew her history and was humorous and intelligent in her delivery of the info.

This tour was really fun and an easy walk through the French Quarter. Trevor was our tour guide and did an amazing job! He was very knowledgeable and had lots of stories for us which was cool.

Had a blast learned alot of interesting information. Trevor was very polite made sure everyone stayed safe with all the commotion in town. Definitely recommending this tour to others.

Robby was fun and entertaining. He answered everyone's questions and was enthusiastic about the material.

Robin was awesome. Very enthusiastic.
His tour was well researched and thorough. We stayed interested the entire time. It was a great time.