Austin and Hill Country Tour with Stops in Unique Vehicle 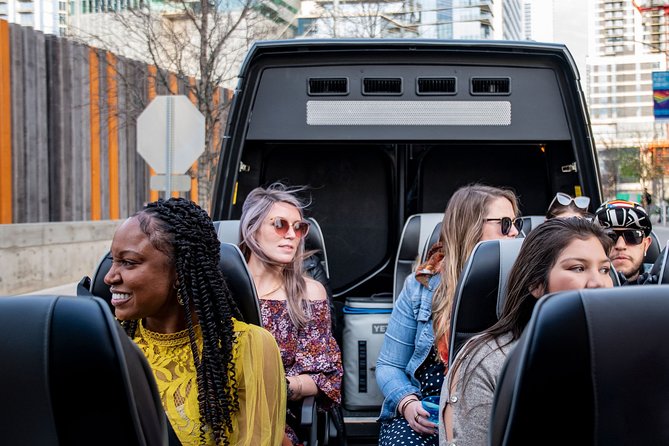 There's nothing better than getting to know a city from a local, and that's exactly what you can expect on this 2.5-hour tour (with stops). Your Austinite guide will share stories about the fun-loving Texas capital aboard a 14-passenger convertible Mercedes-Benz sprinter van. This unique vehicle, which is open air, is also equipped with sanitized headsets that you can use to get to know Austin through conversations, with English and Spanish language options.

See all the local hangouts, hip and historic neighborhoods, and beautiful Central Texas Hill Country. Along the way, you'll get out to stretch for pictures and scenery on 3-4 stops that could include the the Driskill Hotel, Barton Springs, and the award-winning Austin Public Library.

Read the What to Expect section below to learn more about what you will see and where you will stop to visit on this ultimate guided tour of Austin.

Built in 1886 as the showplace of a cattle baron, the Driskill remains a landmark of legendary Texas hospitality. Stroll through the opulent lobby with its marble floors and stained-glass dome, corridors filled with museum-quality artwork, and grand mezzanine for a glimpse into the hotel’s storied past.

The building was designed by a joint venture of San Antonio-based Lake Flato Architects, known for their energy-efficient and sustainable projects, and Boston-based Shepley Bulfinch, successor to the firm founded by 19th-century architect Henry Hobson Richardson.

The new central library offers a living rooftop garden, reading porches, an indoor reading room and a bicycle corral, large indoor and outdoor event spaces, a gift shop, an art gallery and a café run by the ELM Restaurant Group.

Mount Bonnell, also known as Covert Park, is a prominent point alongside the Lake Austin portion of the Colorado River in Austin, Texas. It has been a popular tourist destination since the 1850s. The mount provides a vista for viewing the city of Austin, Lake Austin, and the surrounding hills.

Take a stroll and find Austin-owned restaurants and world-renowned music in this downtown gem. Includes Willie Nelson Statue, Moody Theater where Austin City Limits is recorded, City Hall and it's one block from the beautiful shores of Lady Bird Lake.

The Ann W. Richards Congress Avenue Bridge crosses over Lady Bird Lake in downtown Austin. Congress Avenue Bridge is home to the world's largest urban bat colony, which is composed of Mexican free-tailed bats. The bats reside beneath the road deck in gaps between the concrete component structures. They are migratory, spending their summers in Austin and the winters in Mexico. According to Bat Conservation International,between 750,000 and 1.5 million bats reside underneath the bridge each summer.

Auditorium shores is located on the south shore of Lady Bird Lake formerly known as Town Lake, immediately west of South 1st Street. To its south are the Long Center and Palmer Events Center. The Town Lake Hike and Bike Trail passes through the park from west to east near the shore; one of the trail's major trailheads adjoins Auditorium Shores.The site includes a memorial statue of late Austin resident Stevie Ray Vaughan, who played a number of concerts at Auditorium Shores. The park is known for its scenic view of the downtown Austin skyline.

Within Zilker Park's 358 acres lies one of the crown jewels of Austin: Barton Springs Pool. The pool itself measures three acres in size, and is fed from underground springs with an average temperature of 68-70 degrees, ideal for year-round swimming.

Zilker Metropolitan Park is considered "Austin's most-loved park." This 351-acre metropolitan park is home to a variety of recreation opportunities, facilities and special events for individuals and families.

The Barton Creek Greenbelt, which travels through south Austin, is the go-to destination for outdoor enthusiasts and athletes in the city. You can enjoy hiking, biking, rock-climbing, bouldering, swimming and even lazily passing a day perched in a hammock or sunbathing on a boulder along Barton Creek. Enjoy 12 miles of trails via several access points throughout Austin.

The Percy V. Pennybacker Jr. Bridge in Austin, Texas, is a through-arch bridge across Lake Austin which connects the northern and southern sections of the Loop 360 highway, also known as the "Capital of Texas Highway." The road is widely considered one of the most scenic urban drives in Texas, in large part due to this arched weathering-steel bridge and the rolling hills that flank the road.

Mayfield Park and Preserve is an island of restful respite located in the middle of Austin, Texas. Mayfield Park is listed in the National Register of Historic Places. This entire estate was presented to the city of Austin in 1971 by Mary Mayfield Gutsch for all Austinites to enjoy as a park.

"This Mediterranean style villa was built in 1916 for Henry H. and Clara Driscoll Sevier. Named Laguna Gloria for a nearby lagoon off the Colorado River, the stuccoed home features a decorative window at San Jose Mission in San Antonio. In 1943 the site was conveyed to the Texas Fine Arts Assoc. by Clara Driscoll, best known for her efforts to preserve the Alamo. Her homesite is now owned by Laguna Gloria Art Museum." Recorded Texas Historic Landmark - 1983

The nine-block area of East Sixth Street roughly between Lavaca Street to the west and Interstate 35 to the east is recognized as the Sixth Street Historic District and was listed in the National Register of Historic Places on December 30, 1975.Developed as one of Austin's trade and commercial districts in the late 1800s, the predominant building style are two- or three-story masonry Victorian commercial architecture. Most structures in the area had already been built by the 1880s, though a few notable exceptions include the Driskill Hotel (1886), the Scarbrough Building (1910), and the Littlefield Building. East Sixth Street (known locally as Dirty Sixth) plays host to a wide variety of events each year, ranging from music and film festivals (such as South by Southwest) to biker rallies (such as The Republic of Texas Biker Rally) and the Pecan Street Festival.