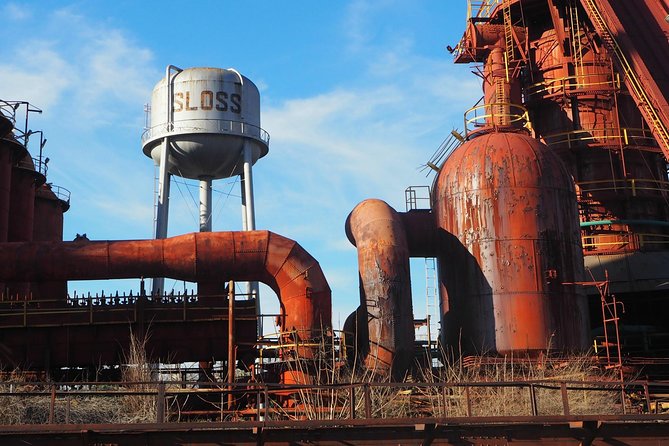 On this 3 hr - 3.5 hour adventure around the "Magic City" we'll hit the historical highlights of Birmingham, AL. From the comforts of our intimate transportation we'll see the best of what this town has to offer and taste a few local treats along the way. To start we'll set our sights on the original rail lines and discuss Birmingham's origins. From there we'll make stops to learn about Birmingham's baseball history, the Civil Rights Movement and when the city was "The Industrial Capital Of the South." We might even head over to Legion Field, site of some 1996 Olympic soccer, or futbol, matches and Rickwood Field, oldest ballpark in America.

Sample some local snacks on the oldest road in the city.

Get a glimpse of the Heaviest Corner...or at least learn why it's called that

Here we will learn about the foundations of the city and how we were built by iron, specifically pig iron.

We will walk around the park to discuss the marches in April and May of 1963 during the Civil Rights Movement.

Guests will learn about the Civil Rights movement here in Birmingham

See the church where four girls were tragically killed in a 1963 church bombing.

See the Oldest Baseball Park in America...right here in Birmingham

This tour was excellent and Clay with Red Clay Tours was most knowledgeable. I enjoyed learning about the unique history of Birmingham. It was a good mix of the varied high points. Edwina R from Washington DC.

We enjoyed the tour with Clay. He is very knowledgeable about the city of Birmingham. WE learned many things that were of interest during our time on the tour

This tour was a great afternoon learning about the historical highlights of Birmingham. Our guide, Clay, was very knowledgeable and enthusiastic about Birmingham and ended the tour with a great dinner recommendation!

I have traveled many times to Birmingham to complete my Master's Degree and graduate certificate in low vision rehab. I never had the opportunity to stay and really get to know the town. Because I had extra time, I decided to tour the city. I chose this tour because it fit my schedule. I travel to many cities and I believe this is the best tour I have ever been on. The tour guide was professional, enthusiastic, well versed and interesting. If you have never traveled to Birmingham and would like to enjoy a great day, this is the best tour ever. I am sure this tour guide has other tours that you may also enjoy. Thank you for the wonderful tour!